Ten days ago, I moved to Canadaland and became a permanent resident.

Our first stop: Toronto to visit The Canadian One’s dad and then today, we’re off to our new town, Calgary, Alberta.

It was Goodbye Land of the Morning Calm:

And Hello Land of the Maple Leaf: 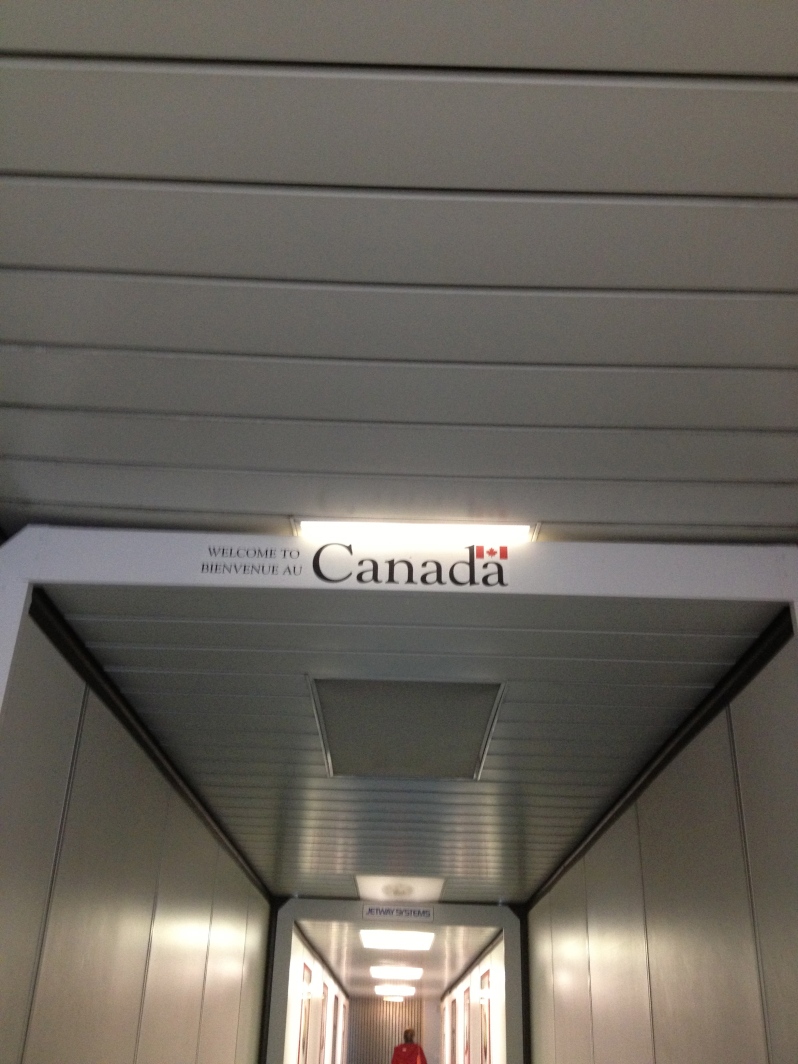 At security in Seoul:

The guy takes my handbag and looks at it.

Him: “Can I look through this?”

He opens it, looks at the mess inside, looks at me and says: “Do you have a pencil case in there? Can you just take it out for me?”

And he pushes the bag back towards me.

At immigration in Vancouver:

The first immigration guy when I approached him: “Aren’t you pretty?” and then he took my passport.

The security scanner dude upon scanning my bag for the second flight, pointed at my bag: “That’s pretty. Did you fly with that?”

I approach customer service to ask which gate our flight is going out of.

Customer Service guy: “Oh, you have plenty of time before your flight to get there. You could go have a coffee. There’s a place just around there.”

Guy: “You could have another one.”

My first Tim Hortons….I’m smiling because in the picture before hand I wasn’t and The Canadian One said I should look happy in my new country…and get used to Tim Hortons.

As part of the immigration process, we had to hand in B4 forms to declare all our items we’re importing at customs. I’d read that the more specific you are, the less likely customs are to open all your suitcases. Not that I was hiding anything, but it would have been a pain in the a$$ to repack everything after a 10 hour flight.

Everyone was searched before us so all hope that we wouldn’t be searched went out the window pretty quickly.

We were called to the desk, I handed in my color coded, perfectly organised, meticulously written paperwork I’d done for both myself and The Canadian One. Guy looks at the stack of papers, looks at us and then our bags. 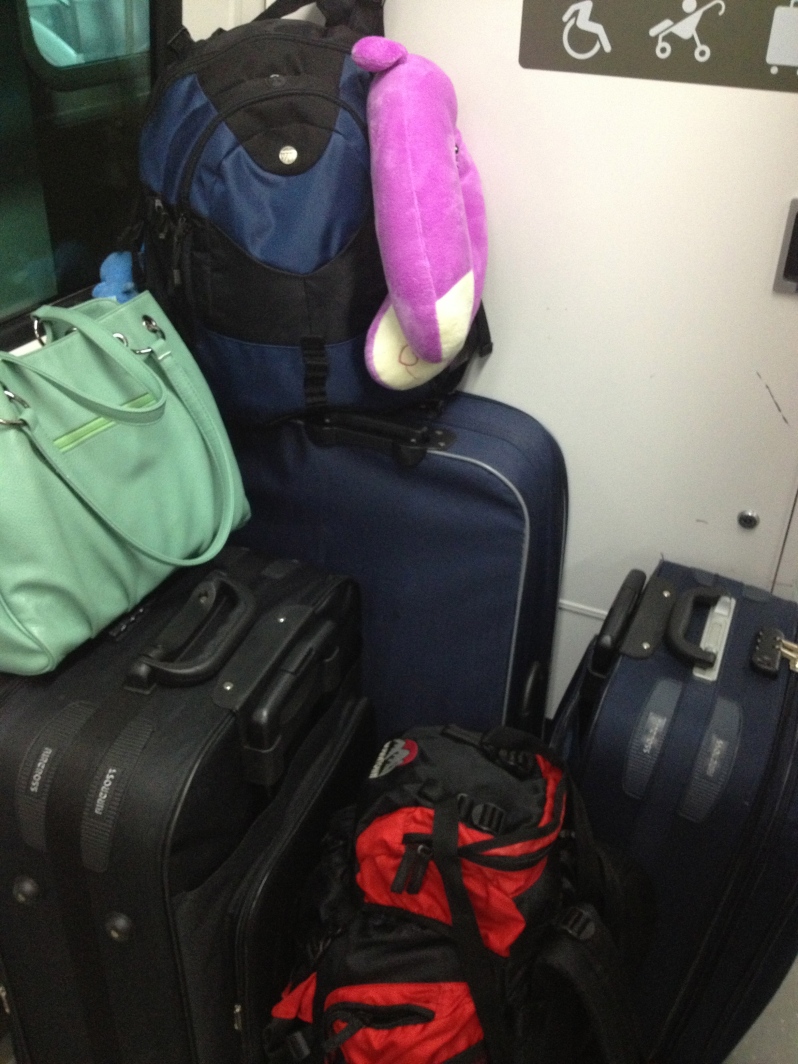 I point to the copy of paperwork from our doctors to say we’re allowed to bring a stack of insulin (him) and migraine medication (me) into the country. He glances at it, looks back at us and says:

“This is all personal stuff. You can keep these. I could write up paperwork for you but really, there’s no point. This looks fine. You don’t have anything over $10,000 in here, do you?”

Guy: “That’s not expensive. We’re looking for things like art or things like that. Great. (hands me back all the paperwork) You have a connecting flight? This is the way out.”

And off we went.

Immigration gave me a booklet to help me integrate and learn the Canadian way. I get started:

I begin to think: ‘Canadians are so nice. I feel like they have an evil agenda….’

Then moments later: Me: “CHIRSTMAS TREES!!!!”

With severe back pain that made me cry in front of other people (I don’t cry in front of other people), I was waddled to the hospital to await a diagnosis. My health insurance hasn’t kicked in as I’m not in my ‘home’ province that I’m moving to so $400, 3 hours and a dose of antibiotics later, I’m told I ‘maybe’ have a bladder infection. We worked out a few days later that perhaps I just injured myself dragging bags around. I switched from Tylenol and codeine to ibuprofen and codeine (all prescribed, don’t panic) and religiously rubbed hot cream (it heats up) onto my back. I’m feeling better. I did feel like I was gonna die / pass out / throw up from the pain (delete according to what day it was).

My mother has pointed out an interesting trend though. Day after I moved to England, landed myself in the doctor’s with severe food poisoning. First weekend in Korea, landed myself in a clinic with a severe chest infection. Second day after moving to Canada, in the ER. Wtf?

Me, on day three, watching home movies on VHS: “Mini The Canadian One!!”

Mam: “What’s the name of the band you’re going to see tomorrow?” 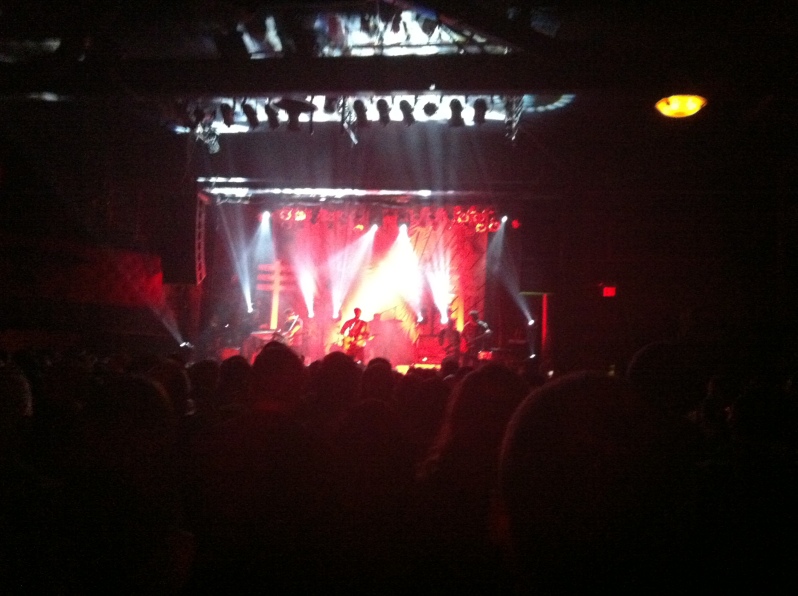 Later: Me: “I waved at a Frabbit! He waved back!! I need to tell Facebook!” 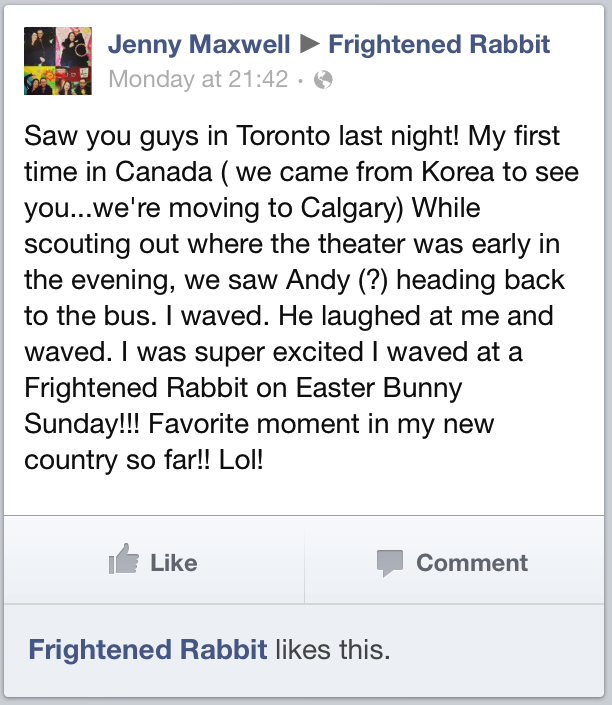 Me, to the guy behind reception: “You sound very British.”

Guy, without even pausing: “You must be Irish.”

Me, in a bar: “I don’t know what Jolly Ranchers are. Or Lifesavers. It’s like everything is the same but not the same at all.”

The Canadian One: “The same as what?”

Me: “My country. I think I’m having culture shock. This is what you read about in books. This is it. I don’t know what a Reese’s Pieces is!! This is culture shock. It’s happening.”

Me, on day six, in Tim Hortons: “I hate Tim Hortons. I’ll never integrate into this country.”

Meanwhile, The Canadian One wins another coffee:

Day eight: I learn what a Wal-Mart is….

And try Boiled Dinner for the first time: 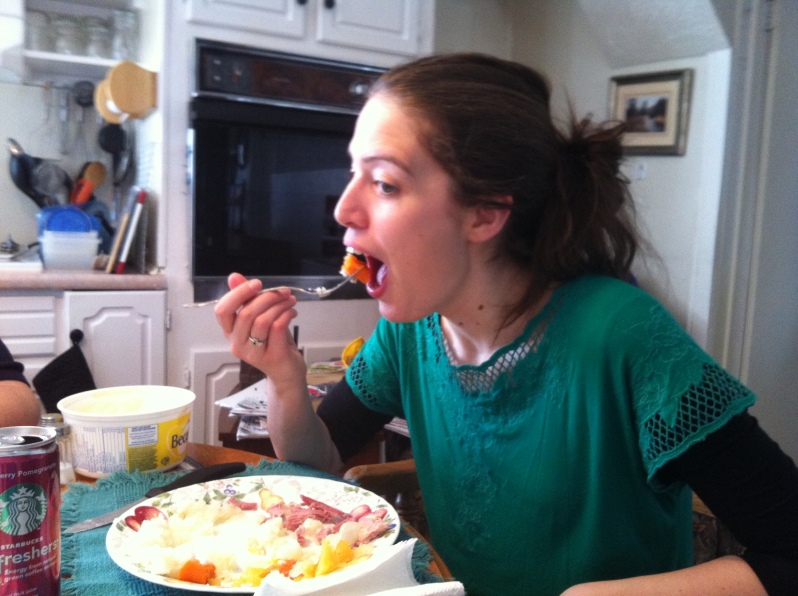 On day nine, it was Take Me Out To The Ballgame time for my first ever baseball game.

And of course, looked at the CN Tower! 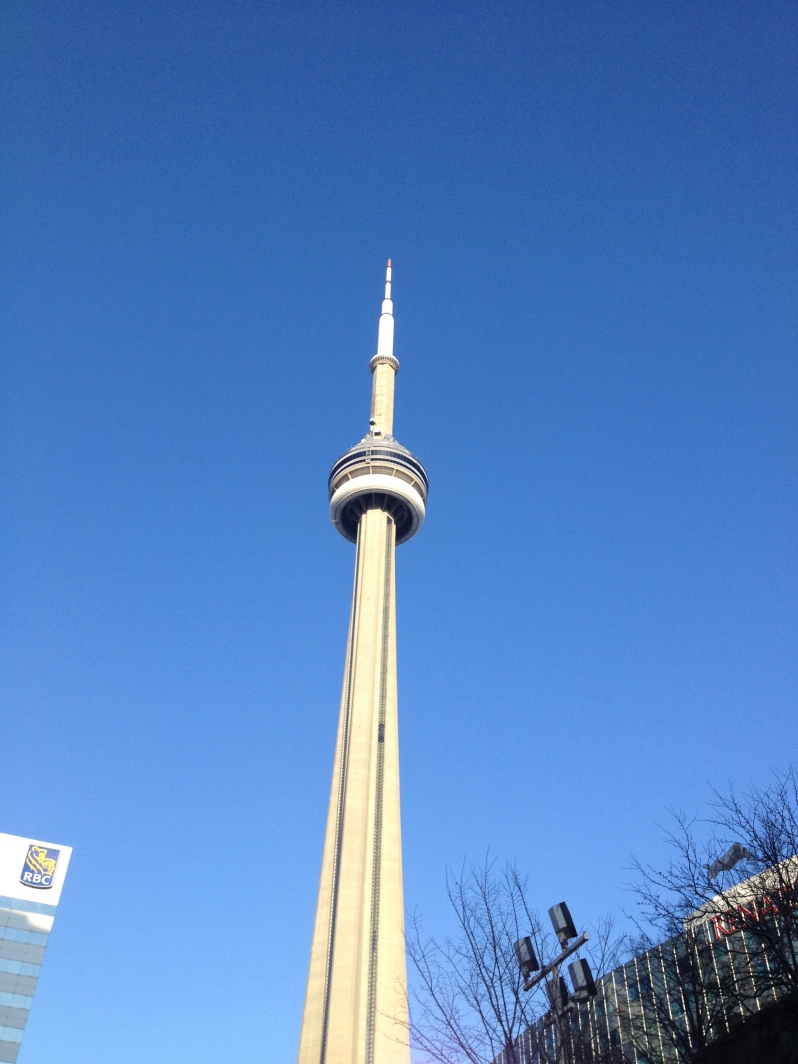 And then The Canadian One knocked it over… 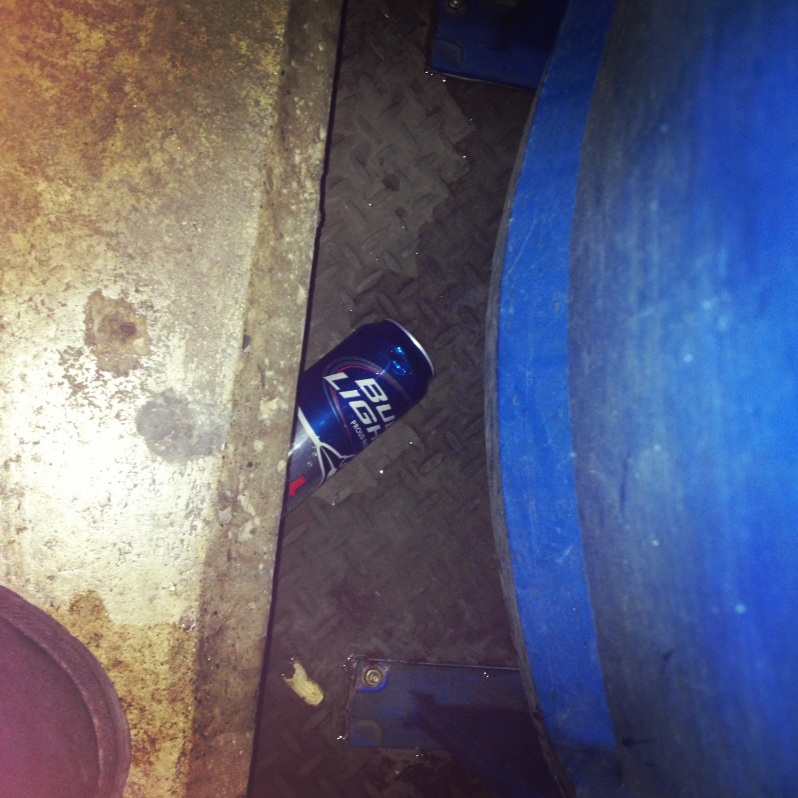 And we’re in the town all our visa paperwork went to all those months and months (and months) ago. 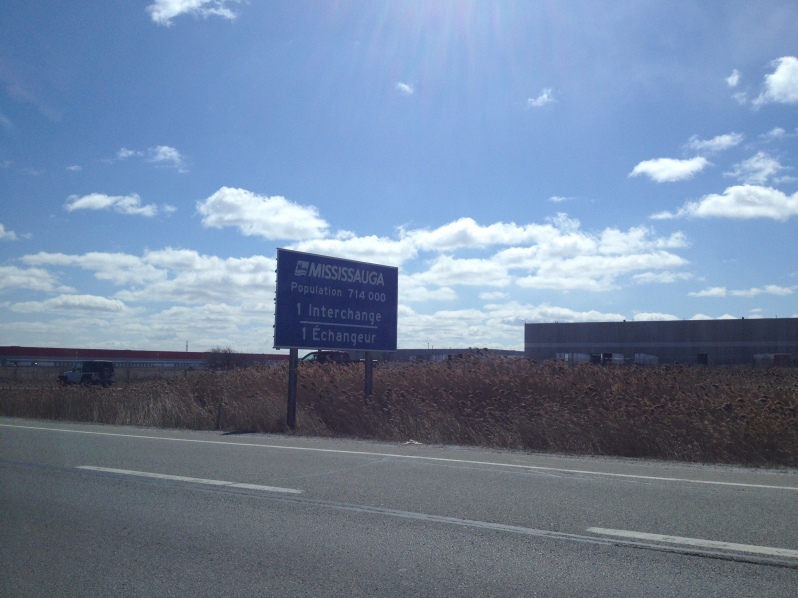 Upon getting our food at the restaurant, I’d ordered an Italian Sausage Pasta.

The Canadian One’s Little Nephew: “Have you ever had weiner before?”

The Canadian One’s Little Nephew: “Do you want to see a dead pigeon before you go to Calgary?”

We opted for no. Apparently The Canadian One’s brother has ‘found’ a dead pigeon next to the wheel of his car. The Canadian One got an email the following morning titled ‘I did not kill that pigeon’ and a picture of the dead pigeon.

Me, to The Canadian One’s father: “So this is what it’s come to, drinking moonshine out of a pill bottle in a shed.”

The Canadian One hits me on the leg in a bid to get me out of bed.

Do you love Quote Friday? Sad to see it come to an end…eventually? Who really knows at this point?! I keep saying ‘It’s the last one’ and then I do one more….

OUT NOW: The QUOTE FRIDAY book, the best of four years of quotes including some never before published ones:‘Watch Out for the Hedgehog’. 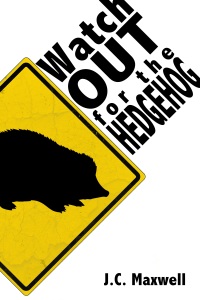 For more Quote Fridays, check out: