Last week, I had the opportunity to take part in a trial of some new virtual reality software being created by a company called Hone, here in Calgary.

Hone uses virtual reality and augmented reality to help train people in how to deal with high-risk, high-stress environments. Using a combination of psychology and technology, Hone hopes to have a positive influence on how people approach stress management in the future.

It was through my work – which has nothing to do with VR – that I ended up in a boardroom at 8:25am on a Friday morning pondering what exactly I had signed up for. 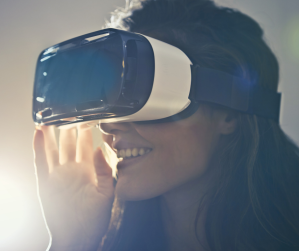 Back in December, Hone came in and had ten of our staff members take part in round one of testing. One of those staff members was my boss. I was highly interested in what was happening and mentioned that I would like to be considered if they ever come back. My boss, true to her word, volunteered me and BOOM, I was in.

I was super excited. I’d never experienced virtual reality before. It looked awesome! I knew nothing about it or about VR in general or Hone or what time it was at or how long it would take or what I would need.

So I blocked off the whole day and began hoping it was a game.

It was not a game. 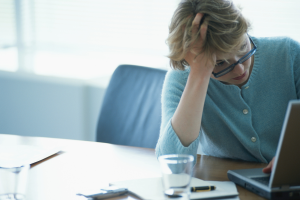 The session was called Applied Stress Management. This is a topic I am highly interested in. I’m apparently a super stressed individual however I don’t always realize it. The first person to point this out to me was my dentist after I cracked and/or broke several teeth though clenching in my sleep – not even kidding – …and then a TMJ specialist who took all of five minutes to diagnose me with TMJ. What a waste of an afternoon off work.

However, this was back in Jan 2018, 18 months after my mother had died and right amid the three months where we had bought a house, got a puppy that seemed allergic to sleep, I changed jobs, it was winter and life was a sleepless, -30 degree, I-have-no-idea-what-I’m-doing jumble.

Things being better now, I was curious to what my stress levels would be in an unknown situation.

The main thing I was hoping to get out of the session was to learn techniques to stop myself from freaking out during my biggest fear: driving.

I hate driving. I have always hated driving. When I first learned how to drive in Ireland, I got stuck on a roundabout because I refused to leave it. Another time, I created a traffic jam on the street, panicked, stalled the (manual) car too much and had to get out – in the MIDDLE OF THE TRAFFIC JAM I CAUSED – to let my mother drive.

Here in Calgary, I relearned how to drive 4 years ago, got my license and then drove 1-2 times a year after that. Usually to the airport or the mechanics and back. Or sometimes just back. Why drive there when the person I’m dropping off can do that?!

Just thinking about makes me panic. When I sit in the driver’s seat I immediately get all hot and flustered. I sweat a lot. If I have to drive somewhere, I used to have to bring a change of cardigan or shirt….Too much information? Incidentally, after 20+ years, I finally found a deodorant that works for me! No Pong (bicarb free version) – All natural, comes in a cute little pot that sometimes annoyingly difficult to open when it’s 6:30am, not an ad, I just really love it! It doesn’t help with stress but it does help my clothing. #thelittlethings

First up was a presentation by Alex Jackson. And let me tell you, Alex is awesome. A very calming individual. Bit like a living Ted Talk. There were graphs and things to look at and none of it was confusing. Alex’s presentation was informative, engaging and slightly terrifying when he described what we would be doing.

We would be donning our super awesome VR googles and some other techy things that monitor skin and heart rate.

Then we would be getting into a virtual reality elevator which opens onto a rooftop.

So far so good.

Then we would be walking along a plank 80 stories above the ground to get a piece of cake and bring it back into the elevator. 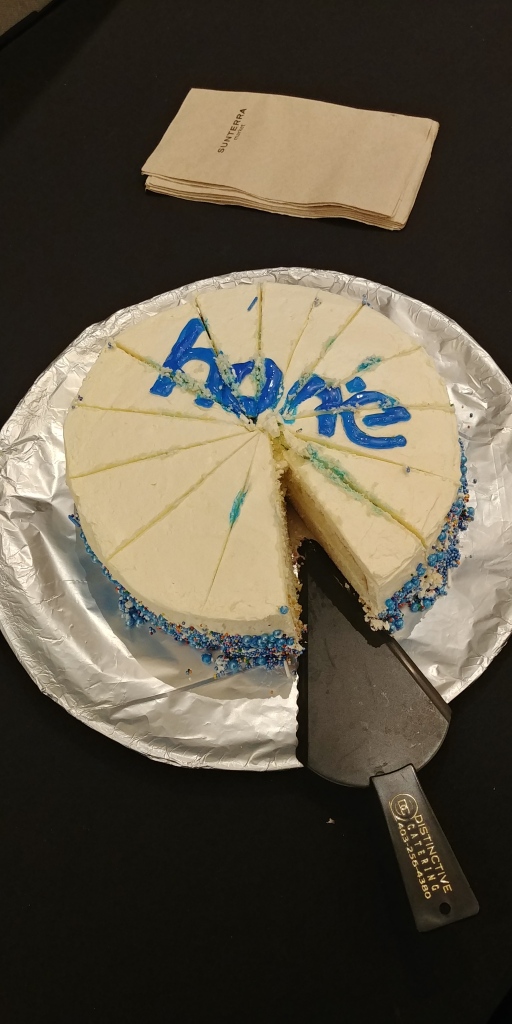 Suggestion for Hone: Kittens. I woulda bounced along that plank if there were kittens available to play with. #justsayin

So here I am, standing in a small room with Alex, Phil – also from Hone who I’d just met – and two other guys at computer monitors whose names I didn’t get. Alex is explaining to me how it’s going to work.

In front of me, a guy is setting up a real wooden plank on the carpet. This thing is about 2-3 inches from the ground maybe. I’m looking at it and looking at Alex thinking I can totally walk along this. My only fear was twisting an ankle in my heels cos I 100% ignored the ‘wear tennis shoes’ part of the email.

Alex has me clip a small sensor to my ear and puts little cotton and Velcro finger sensor thingys on the first two fingers on my left hand.

He then lowers the goggles on to my face and HOLY SH*T.

I was transported to a busy city street. I was opposite a park. There was a butterfly. I was fascinated by the butterfly. It seemed so real. I almost wanted to touch it.

It sounded real. I could hear people and traffic and nature.

I immediately felt hot and flustered and I hadn’t even done anything yet!

I started looking around and completely missed some of my instructions. 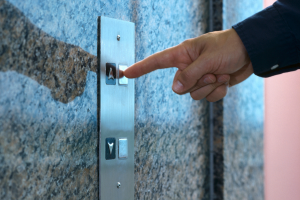 I get into the elevator behind me, press a button and wait. The elevator goes up. I can see a gap in the door that shows we are moving up but I don’t focus on it. Instead I look around the elevator. There’s a small warning sign, some buttons for other floors and no mirror. I am listening to the elevator music. It’s quite soothing and not so bad, I can do this, this is….

‘Ou wind…’ I say out loud. I didn’t actually realize I’d said this aloud until Phil told me later.

It legitimately looked like I was 80 stories up. I was suddenly terrified. And I’m not scared of heights!

What am I doing? The cake. Right.

Where’s the cake? Oh…there. Right in front of me. At the end of the plank.

I walk forward a little, hit the real plank and almost trip.

As I take a step up onto the real plank, VR me steps onto the VR plank. The calibration was just the slightest bit off so I was half on the VR plank, half on nothing on my VR screen. It was surreal.

I shuffle along the plank. Shuuuuuufffle. Slowly. Slooooowly. When I got as close as I was willing to get to the cake I waved the wand I was given. Nothing happened. I’d have to get closer.

Then I heard ‘Push the trigger button’….and stopped shuffling. I bent down, waved the wand dramatically in the cake’s general direction, grabbed the cake, shuffled backwards and back into the elevator.

Let’s remember, I am still in a carpeted boardroom in an auditorium in my work building on a plank two inches off the ground.

It felt like that scene in Ant Man where this hugely dramatic thing is happening on screen and then we pan out and it’s just a little train going around.

Alex asks if I want to try again but this time ignore the cake and jump off the plank.

Why would I want to do that?

Of course, I said yes because I was already here and I’d gotten the cake and…ugh, why not?

Back into the elevator I go. Up to the roof I go. The music drowns out Alex’s instructions so I hear nothing until I reach the top. I look through the gap in the elevator this time. I ask what happens when I jump. Do I land? #validquestion

No. I don’t land. It all goes white and angelic music plays. I burst into laughter. I start feeling better. Alex talks me through breathing and visualising my goal: Jumping off the plank.

Why couldn’t there be kittens?

I stepped out onto the plank. It was re-calibrated this time and was in line with me.

I was nervous. This was a fear that I didn’t think I needed to overcome! But alas, there I was, knowing logically where I was, that this wasn’t real, I was just stepping onto carpet not an 80 story drop.

I scrunched up into defensive mode, the clenched hands against my chest move I do when someone startles me or that time I watched IT, the new one. Still not sure about that movie. I mean, did I like it enough to watch the sequel? It’s hard to tell.

Back to the plank.

Just a step. Onto carpet. Not off a building.

I ask if I have to keep my eyes open as I fall.

OK. I can do this. I nervously giggle at the absurdity of me being scared by this. Yet I STILL DIDN’T MOVE.

Alex explained where he was in the room and I instinctually prepared to jump/step off towards his voice.

My foot hit the not-plushy-cos-it’s-a-boardroom carpet while my VR self plummeted 80 stories to the white screen and angelic music. I watched the whole time. It was freaky, exhilarating and then very funny. The angelic music. It was just such an absurd ending.

I was on the ground. I took off the googles.

Next up was a check on my stress levels on a readout.

As you can see, I was slightly freaked out the entire way through it would seem, peaking at several specific points:

Overall, it was a lot of fun and I would definitely do it again without question. I’m already wondering if they plan to come back for a third round of needing volunteers.

I even recommended to The Canadian One that he should try it as – even though I did get him up into a hot air balloon last summer – he is terrified of heights and this may help him.

In terms of driving, I still haven’t gotten back behind the wheel but it’s winter and snow driving is not the time to overcome that fear. It seems more like a summer fear-busting task, no?

Incidentally, during the debrief we were asked if we think anything else would motivate us more than cake.

I immediately thought of kittens however opted not to suggest that as others seems happy to walk a plank for cake.

Then the planner in me gets involved and it’s like, where would you get the kittens? You’d need litter boxes. And food. And someone could be allergic. And would you rent them or adopt kittens for this task? And how many kittens? And would the owners of the boardroom you are renting allow animals? And what if someone got scratched? Would it be an OH&S problem? There’d be reports and paperwork. It would be a whole thing.

What do you guys think?

Would you walk a plank 80 stories up for cake or kittens?