***Welcome to ‘Cat Week: Like Shark Week But Fluffier’, a week of all things CAT.***

Above – ‘The Sick Kitten (1903)‘ by George Albert Smith, widely considered as the first kitten video ever made.

And he has a point. On August 30th, thousands of cat-lovers gathered at the Walker A

rt Center to celebrate the phenomenon that is cat videos. With sponsor Animal Planet, the Walker Art Center had over 10,000 submissions to its Internet Cat Video Festival, submissions organiser Katie Hill sat down and watched, trying to narrow down to contestants.

Culled to 79 videos divided into several CATagories, Comedy, Drama, Foreign, Animated, Documentary, Musical, Art House, Lifetime Achievement, and People’s Choice, th videos were shown over the course of 90 minutes at the festival. The People’s Choice award was up for public vote prior to the event and the winner was Henri 2, Paw de Deux, a black and white noir take on the life of a cat in existential crisis.

Below are 10 of our favorite cat videos on the internet and don’t worry if you missed out on the cat film festival, all the films are online for you to enjoy in the comfort of your own home.

Maru, a Japanese kitty obsessed with boxes has been seen by over 8.5 million people worldwide.

This 17 second clip of a surprised kitten has been seen by over 65.5 million people. 65.5 MILLION PEOPLE!

‘So “Nyan Cat” is a looped animation with looped music. It’s this, just like this. It’s been viewed nearly 50 million times this year. And if you think that that is weird, you should know that there is a three-hour version of this that’s been viewed four million times. Even cats were watching this video. Cats were watching other cats watch this video.

But what’s important here is the creativity that it inspired amongst this techie, geeky Internet culture. There were remixes. Someone made an old timey version. And then it went international. An entire remix community sprouted up that brought it from being just a stupid joke to something that we can all actually be a part of. Because we don’t just enjoy now, we participate.’ – Kevin Allocca, YouTube Trends Manager on ‘TED TALKS: Why Vidoes Go Viral’

Incidentally, just to add to the insanity, there’s also a 10 hour version that’s been seen by over 18 million people.

Momma cat hugs babby kitty having a nightmare…adding some awwwww to your Tuesday.

51 million people have checked out this video of two cats talking.

If my cat ever started doing this, well, needless to say I’d video it and put it on YouTube, of course! With over 8 million views, this cat sounds like a toddlers refusing to eat his broccoli!

And finally, the winner of The Internet Cat Awards, ‘Hendri 2, Paw de Deux’, the black and white tale of a house cat in the midst of an existential crisis. Oh, and it’s in French.

For more Cat Week: Like Shark Week But Fluffier, check out: 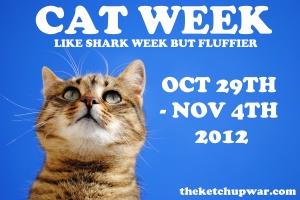 Henri 2 gets my vote for best, but have you seen this one? http://www.youtube.com/watch?v=pwHy4gMO6sU