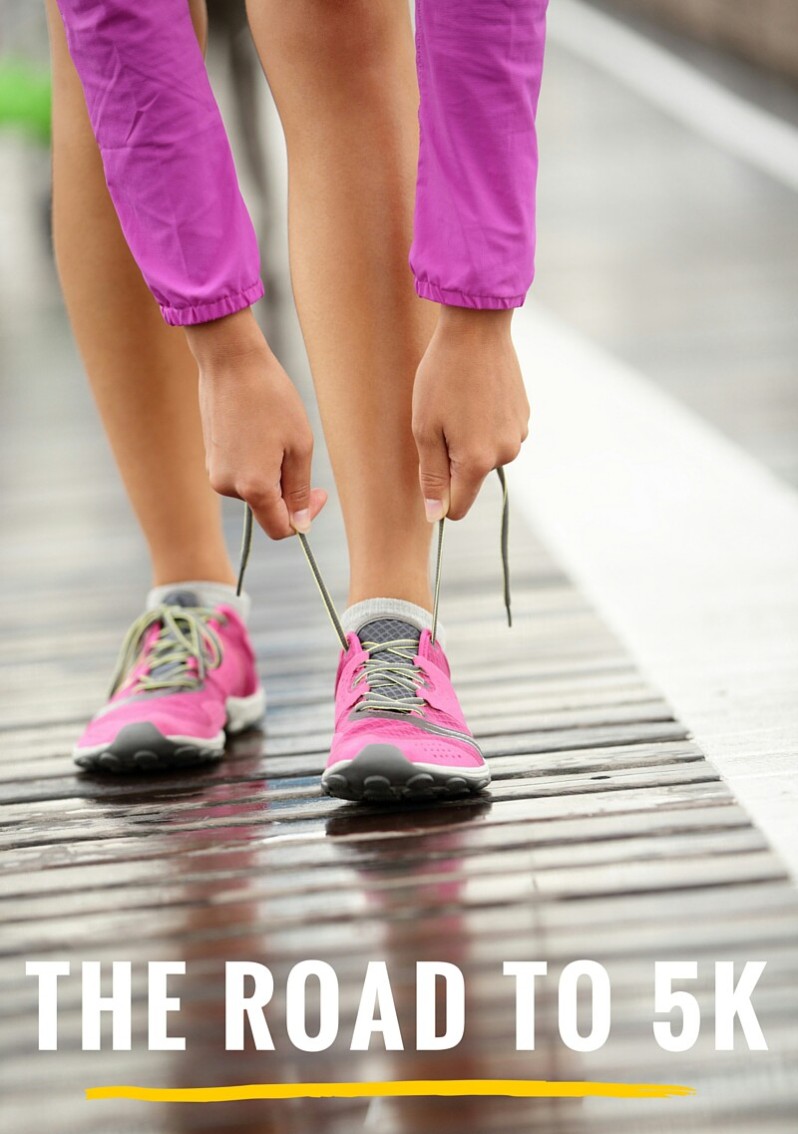 …it’s not been going well.

In my second week of training, I started to get these twinges in my right knee. I didn’t think much of it. Maybe it was from suddenly starting to do an exercise that didn’t involve Netflix and the couch. Or from having an inability to run in a straight line.

Why is that so difficult?

The first time it happened, I ignored it. Meh, it’s nothing. Just the usual muscle pain associated with new exercise. It soon wore off and I was fine. The second time, it took longer for me to get over it. I sat around my house, my knee feeling hot and puffy but generally looking fine. Normal. Like a normal knee should look.

I jogged again two days later – keeping with my every-second-day schedule – and quit midway through. The pain was shooting through me and I worried I would become stranded a 15 minute jog from home unable to walk. I briefly considered locating a Car2Go and then realized I should probably just continue walking.

I went home and lay on the couch, sad.

It had become a problem.

I put heat on it.

You should not put heat on it.

I called my regular physiotherapist thinking that may be the solution but she was out of town. I quickly acquired a new one and set up an appointment for the following week.

I happened to be seeing my regular doctor for completely unrelated issue (renewing a migraine meds prescription) and casually asked if I should be using heat or ice. We established no heat. Heat makes it worse and I got a prescription for some kinda, I don’t know, like gloopy gel you rub on your knee. It’s sort of the consistency of Vaseline. It’s weird. I’m not sure I like it. And I’m not sure it does anything.

And also I lost it somewhere.

My appointment with the physio came and poof, I was quickly diagnosed with patellofemoral injury aka Runner’s Knee. 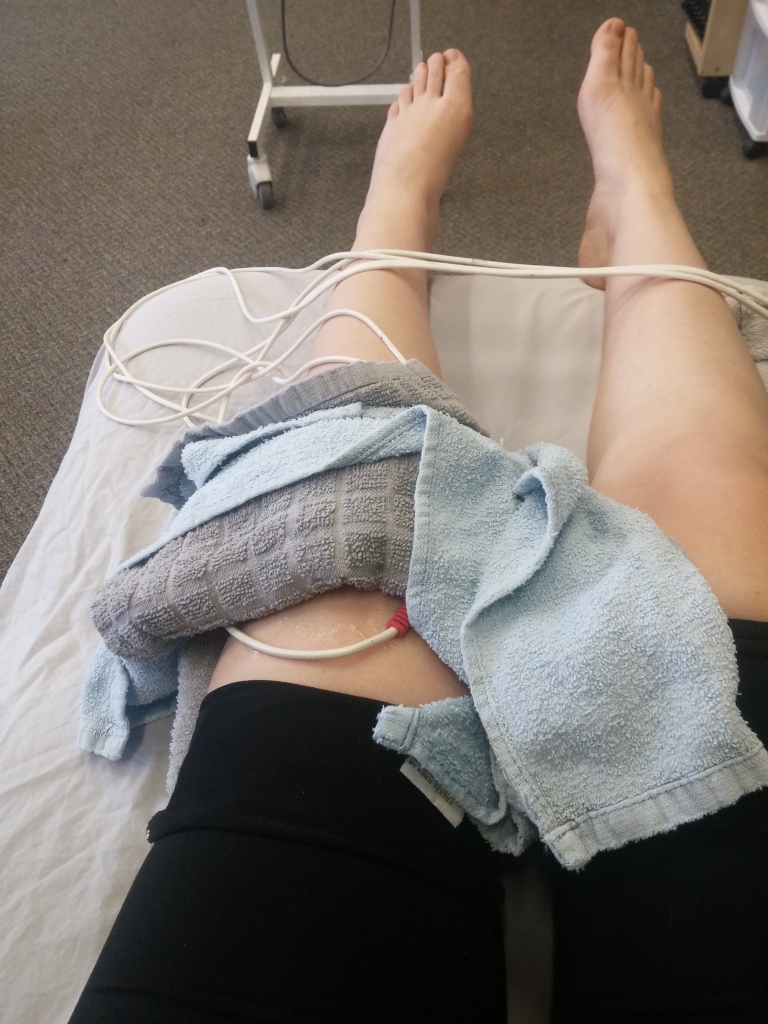 Seriously. Was there ever a more apt name for an injury?

I got all taped up, got given my set of exercises to do and was ordered to jog a little on Sunday…which I failed to do. It was raining.

And I was hungover.

But mainly, the rain thing. 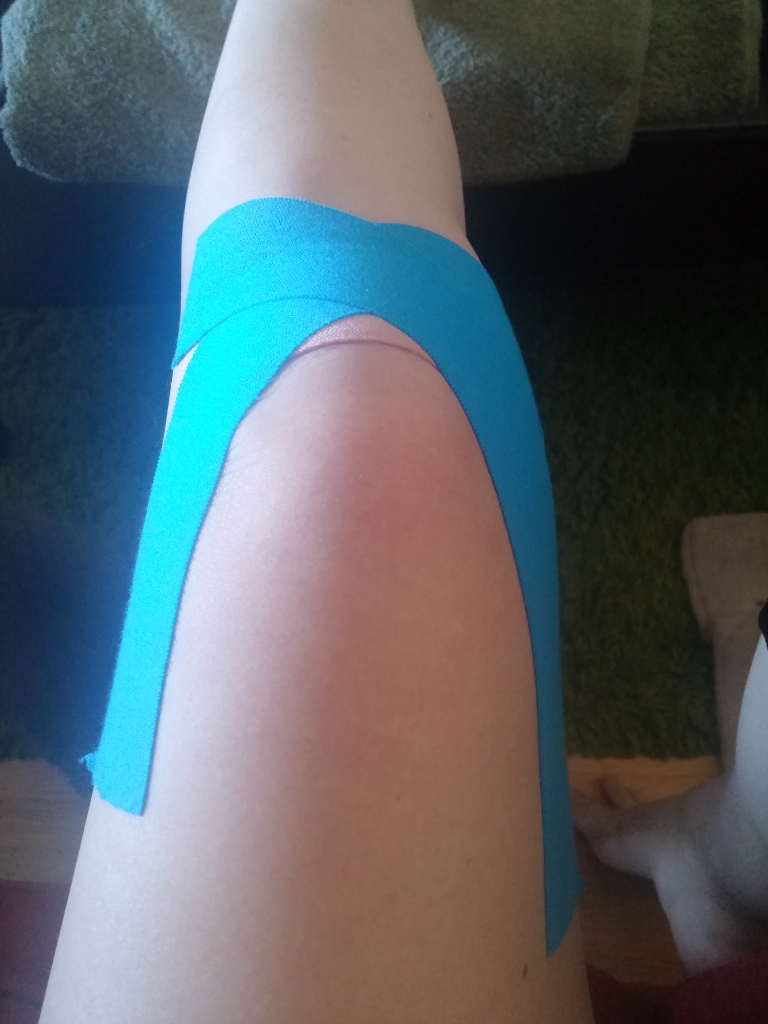 I returned to physio on Monday and, having been through a year of physio before and knowing these lovely magical people don’t take kindly to bullshit, I trailing my ‘Hi, how are you?’ with ‘I have done minimum exercise and didn’t jog’.

Just wanted to admit that right off the bat.

We did a little physio, some ultrasounding, some stretches and I was sent home with the same exercises and schedule I had failed to follow the previous week. We also discovered pain in my left knee and things started to look bleak for the marathon. 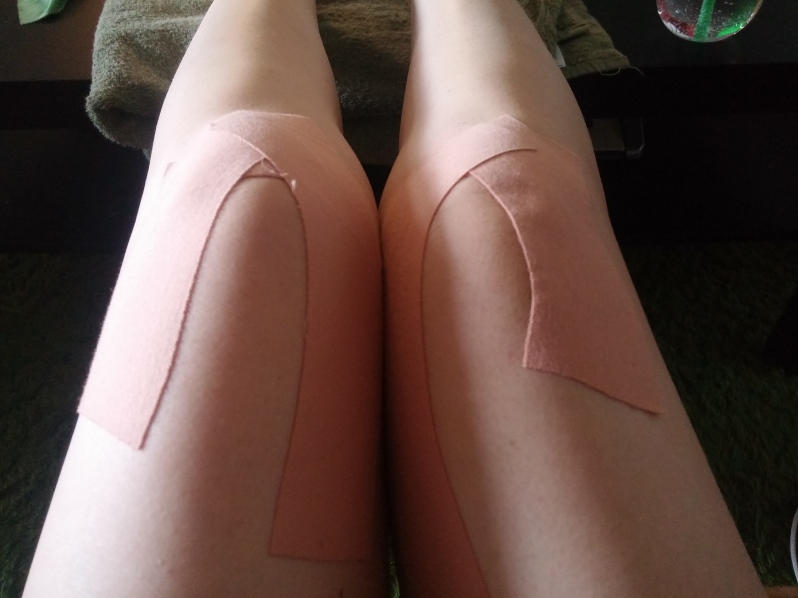 Between my second and third appointment, the following Monday, I managed 2 short jogs (I did Week 1: Day 1 again, twice) and got through some of the exercises I was given.

Yes yes, I know, you should follow your physio’s advice, blah blah blah.

The pain was hovering around a 1 on the 1 to stabbed-in-the-eyeball scale and I was feeling pretty good. At my third, and last, appointment (13 days from Race Day), my left knee had healed and my right knee was doing so much better I was given new exercises, the go-ahead to at least attempt the race and a doctor’s note to excuse me from the fire drill that was due in my building. I work on the 40th floor. Evacuating during a fire drill from that height is bad enough when you are completely fine (hot, pissed off, and wishing you’d brought your coffee doesn’t count here), but with an injured knee, a 5K race looming and 3 physio appointments behind you, it’s not a good idea.

Which brings me to 6 days ago. I set out, sans Couch25K app, to just generally get a feel for what the distance of 5K felt like. I miscalculated the yellow ball in the sky and overheated almost as soon as I left the apartment. I made it to 4.16km before I genuinely thought the sun would kill me and I needed to wear less clothing.

Two days later it snowed (welcome to Calgary), so I waited until the following day. It was rainy and windy so I dressed appropriately in long pants, a t-shirt and sweater. About 20 minutes in I felt ill. I was hot, nauseous, a little dizzy and winded and, let’s be fair, I wasn’t really going that fast I should not have felt like that.

All over my legs.

I was overheating and itchy and my chest started to hurt. My breathing, however, was fine and I quickly worked out this was not an emergency situation. I slowed to a snail pace and meandered home hitting 4.06km

Once in the door, without the distraction of the outside, the itching intensified. I took off my sweater and pants and stared at my legs.

I grabbed an ice pack for me knee and a glass of cold water and sat down…then did what any normal person would do in this situation. I took a picture of my legs and sent it to The Canadian One. 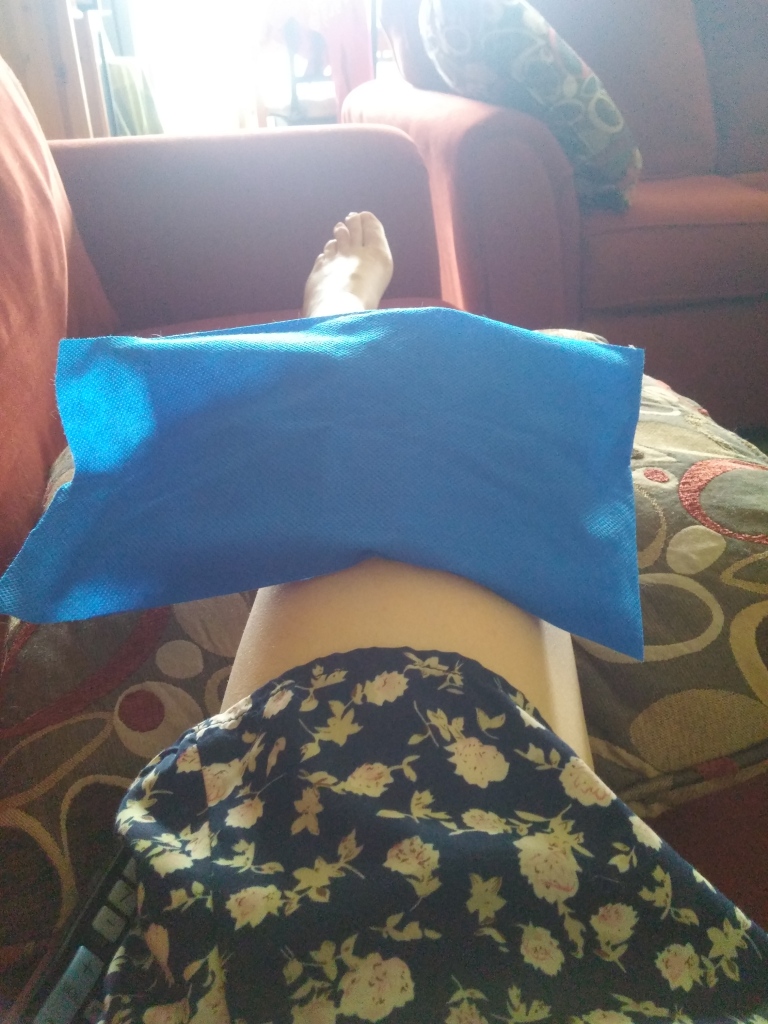 This a picture of my matching ice pack, dress and knee tape. Not the hives. Sorry.

I do enjoy co-ordination.

The hives disappeared within 40 minutes and I narrowed the cause down to:

Now, while it is most likely that last one, I did seriously consider the first one as the answer.

Not giving up, I jogged 2.5km yesterday and, though my different-pants-I-wore-a-lot-when-training were itchy, they did not produce any hives leading to believe perhaps the itching was imaginary this second time.

Tomorrow I’ll attempt another 4-5km (today I’m taking a break) and I’ll update you on #HiveGate. And yes, I carry my EpiPen on my runs now…it’s in my cellphone holder belt…and is super inconvenient! Where am I suppose to put my phone now?!

Remember 6 weeks ago when I was like ‘Oh, hey, you know what might be fun, running a marathon. Yes, I know I’ve never run or even exercised before but how hard can it be?!’….A hurt knee, $50 worth of running clothes, 3 physiotherapy appointments and an outbreak of hives later and I think my brother may have put it best: 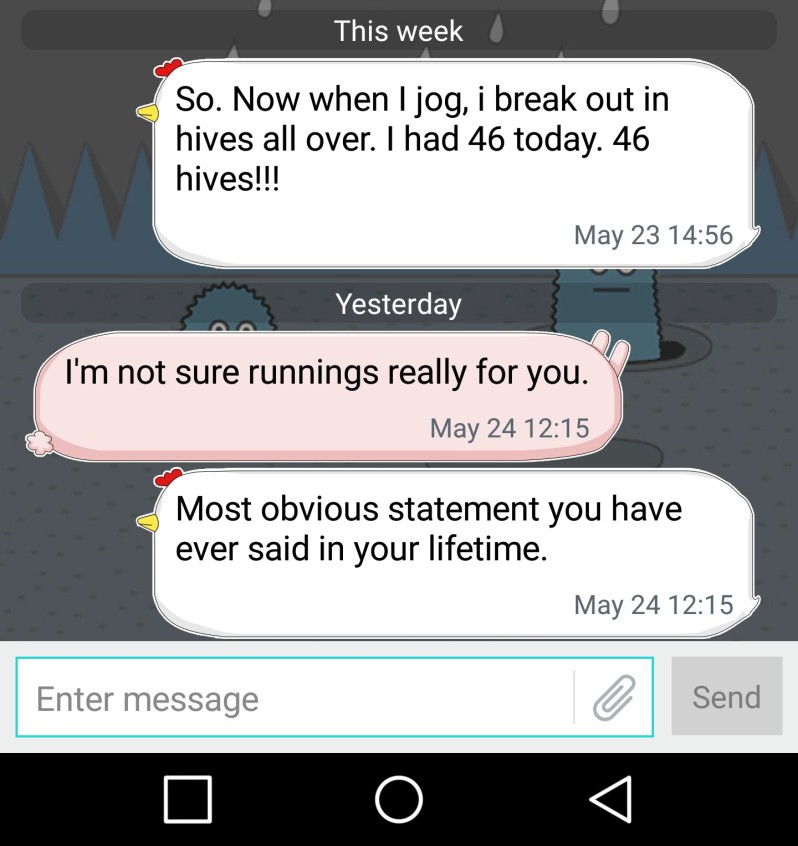 And yes, it routinely takes him 24 hours to respond to my texts.

However, I am still determined to do this 5K. If it takes me an hour to wander through the thing, I will do it. I set out on this mission and I am going to achieve it.

I WANT MY MEDAL!

Wait……do I get a medal? I should look that up.

OR The Canadian One can just get arts and craftsy and fashion one out of gold foil and Sharpies.

I would say ‘out of tin foil’ but I want a gold one goddammit.

Follow along with me as I go from binge-watching Scandal with gummie bears and Ruffles to running 5K in the Calgary Marathon in the space of 7 weeks supporting Alberta Animal Rescue Crew Society (AARCS). Feel free to sponsor me here or just laugh along at my running journey.

The Road To 5K: The Prelude

The Road To 5K: The End of Week Two