In a study published this week, and one which is sure to re-ignite the Facebook-privacy fire, researchers have shown that Facebook users are unwittingly revealing all about themselves through their likes.

Funded by Boeing and Microsoft Research, the study shows that Facebook can be used to accurately predict a wide range of personal attributes including: sexual orientation, ethnicity, religion, political views, personality traits, use of addictive substances and age and gender. It can even tell researchers whether or not your parents were separated by the time you were 21.

The average person has 170 likes on their profile and it demonstrates how, through looking at the very basics of information a person provides online, an automatic and accurate estimation of what that person is like unfolds.

Although one could say the same could be said by looking at a person’s Google history, Web browsing or Twitter subscriptions, the only difference here is Facebook likes are currently publicly available by default.

The study was able to correctly predict if:

It goes on to show how personality traits were a little more difficult to predict accurately with them only being able to predict correctly:

People post less when they’re happy but give them something to complain about and off they go like a rocket.

It also shows that people who like ‘Hello Kitty’ tend to be high on Openness and low on Emotional Stability.

They’ve set up a website where users can test out the personality traits aspect for themselves at youarewhatyoulike.com. This was my result taken from my 120 likes: 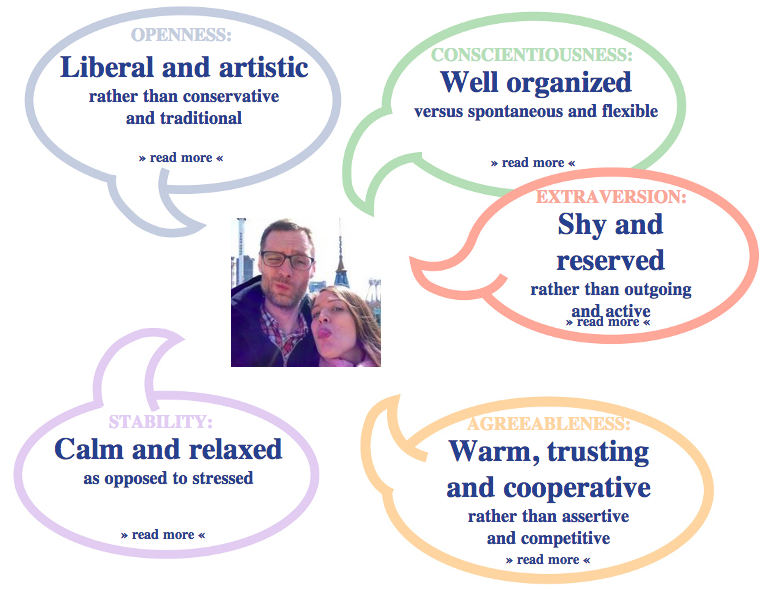 Helpfully, it told me this:

I don’t ever remember liking Jeff Healey. I do like him but I don’t remember liking him. The others I’ll cop to that yes, I do like them. Crowdrise is awesome. You should all check it out when you‘re done reading this.

Intriguingly, the study demonstrates how individual likes and traits correlate. For example, they found the best predictors of high intelligence include ‘thunderstorms’, ‘curly fries’ and The Colbert Report’. Good predictors of male homosexuality were ‘No H8 Campaign’, ‘Mac Cosmetics’ and ‘Wicked the Musical.’ Liking ‘Britney Spears’ and ‘Desperate Housewives’ were considered moderately indicative of being gay whereas people who liked ‘Being Confused After Waking Up From Naps’ were most likely to be straight men.

It’ll be interesting to see, moving forward with this study, if businesses start using it to tailor their advertisements and services more to the individual as oppose to the whole and how the publication of this study will serve to push the debate on privacy in the Digital Age.

If anyone wants to check out the study, it’s called: ‘Private traits and attributes are predictable from digital records of human behavior (2013)‘ – Michal Kosinski, David Stillwell, Thore Graepel published by Proceedings of the National Academy of Sciences (PNAS) journal